How to Rock Your Event with Snapchat and Instagram

I suppose that until now, we are all familiar with Snapchat and Instagram and how they became an essential tool in event marketing. 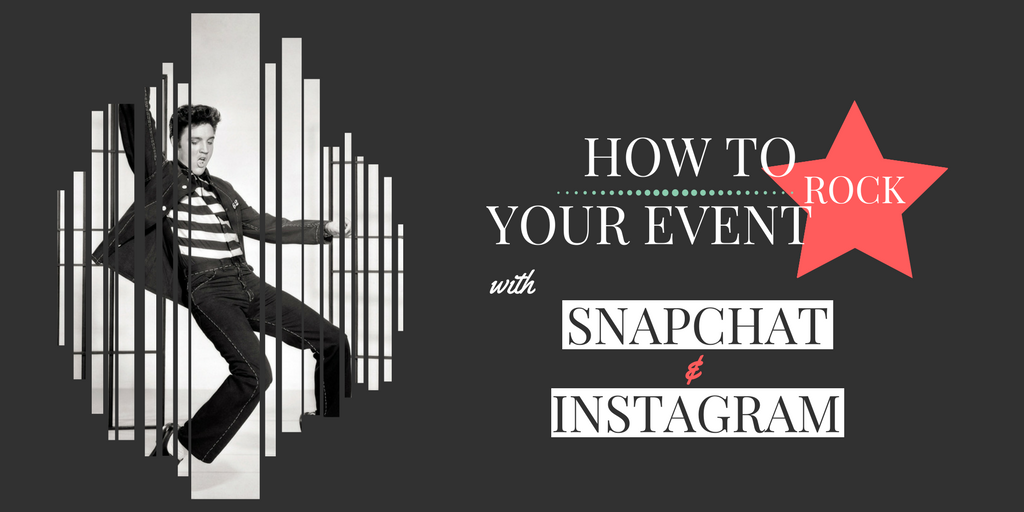 Even though Snapchat is losing market share since the launch of Instagram’s stories, it seems that the two are slowly taking different directions regarding the market segmentation and the user’s behavior while using the app. Instagram’s users are mainly over 24 years old and spend around 15 min a day browsing while 60% of Snapchat’s users are under 24 years old and spend an average of 30 min per day creating content. (Read more)

While Instagram is great in bringing awareness of an event within their 600 Million user base, Snapchat is perfect to create content and especially post event marketing material.

In this article I am going to talk about what are the best practices and uses of both Snapchat’s and Instagram’s stories.

How can you make use of the Stories in order to promote your event?

If you’re building live streamed events you can combine what’s happening at the event, Snapchat and Instagram, as well as your own, streamed channel with a live streaming tool such as Streams.live .

How to use and create Snapchat’s Geofilters 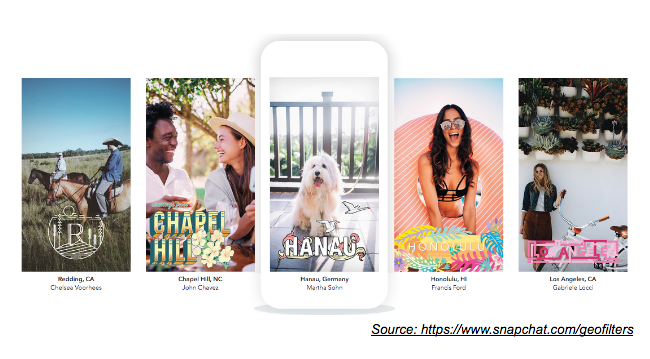 Snapchat offers their users the opportunity to create their own Geofilters according to the occasion.

Community Geofilters are mainly used for a place that it is meaningful for you and your community (this geofilters are free of charge).

Personal Geofilters are created for important moments which happen in every one’s life, such as birthdays, welcome home parties or any kind of events. (the price for these geofilters starts at $5).

Business Geofilters are dedicated to help any kind of business drive awareness and engagement in one swipe. The event category will fall under this section too. They are more pricey than the Personal Geofilters but still affordable.

Unfortunately,  the On-Demand Geofilters (Personal & Business) are only available in the USA, Canada, Australia and UK.

How to create your Geofilters for Snapchat

First of all, the Geofilters have to be original and in order to do that you need to design or have one designed it for you. PicMonkey and Canva are two good example of platforms that can help create wonderful filters.

From February 2017, Snapchat, launch a tool that creates on-demand geofilters on the web so that you don’t have to use any other external platforms.

For those who still prefer creating a Geofilter with a tool that they are more comfortable and familiar with, need to keep in mind a few aspects when designing it:

Snapchat and Instagram are two amazing tools that should not be ignored while organizing an event. Comparing them with other channels of event marketing, they are cost effective and sometimes free – why not take advantage of their great features? Also, if you are looking for a user-friendly event registration software, you’ve come to the right place! 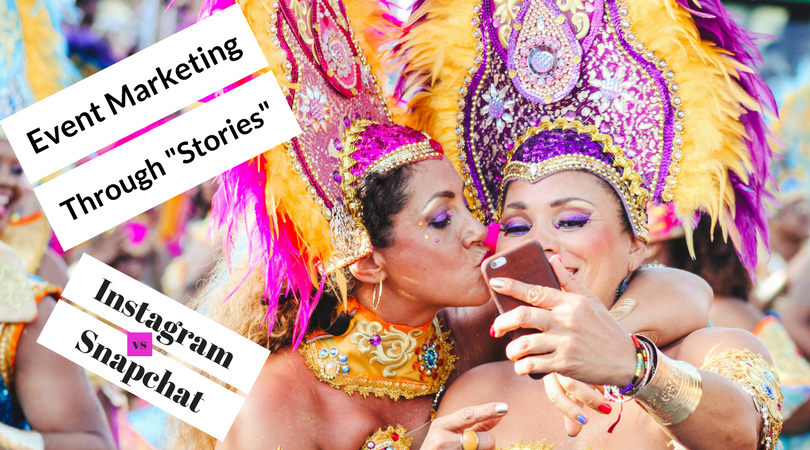 For almost one year now, it’s been quite a war between Snapchat and Instagram – Why?

Well, on 2nd of August 2016 Instagram has launched the Instagram Stories, which are the identical copy of Snapchat Stories. For those of you who don’t know what Snapchat does, here is a brief intro; a Snap is a picture or video you send through the app to one or more of your friends. It will disappear after a maximum of 10 seconds and can only pe played twice. You have the option to add multiple photos and videos as well into the “My Story” feed which will disappear after 24 hours and can be viewed undefined times; visible to your friends only  if you have a private account or by everybody if you have a public account.

Instagram did not stop here, and one year later it hits again by copying Snapchat’s crowd-sourcing photos which allows users to send photos or videos from a specific location or event. Basically they can add photos from their personal story to nearby locations. Afterwards Instagram will curate the photos and the selected one that would show in the Explore tab as another story, let’s say New York (story). These stories created through crowdsourcing photos and videos can be searched after the location and hashtag. Learn more how to use crowd-sourcing photos for your next event.

Crowdsourcing photos and Geofilters are two of the features that made Snapchat famous among all types of events; managing to create a high level of awareness within numerous events by collecting loads and loads of photos/ videos from all kind of participants at the events. It is an easy and friendly way to promote and bring awareness of your event . Learn more about how to promote your event through Snapchat.

It was quite a significant hit for Snapchat when Instagram launched its “stories ” because they suffered a substantially daily users decrease.

Another report on TechCrunch found that both Snapchat views and posting of stories counts decreased by 15-40 percent after Instagram Stories launched.

Mike Albanese the CEO of social talent media company Galore’s says “Influencers that were late to build an audience on Snapchat pretty much abandoned the platform because it was so much easier for them to reach more people through their existing audience on Instagram Stories.”

Influencers have also noticed that the engagement rates are 3-5x higher on Instagram than on Snapchat. No matter how faithful you are to Snapchat, you’ve got to do what’s best for your business. 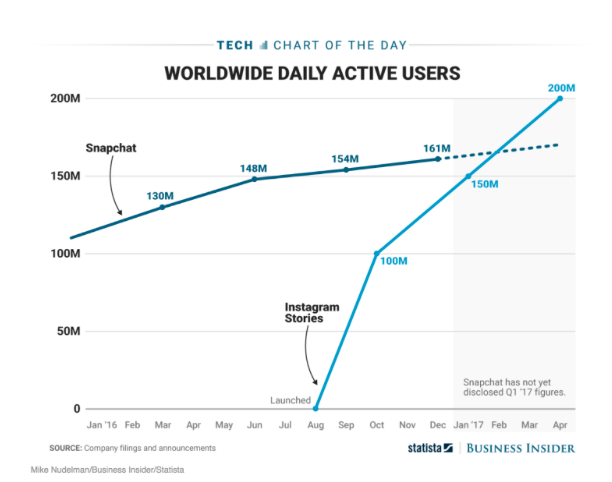 In order to fight Instagram, Snapchat launched Custom Stories in May 2017. Custom Stories  is similar to the normal story posting, the only difference is that it allows users to create their own events within their chosen friends. So for example, if you are organizing a birthday party, you can create a story named “`Birthday Party” and invite only the friends you would like to post in that story. Through Custom Stories, Snapchat is trying to focus more on offering a qualitative and tailored content to their users.

Creating the Customs Stories seems to be the logical step after creating  a tool that creates on-demand geofilters on the web, in February 2017, which allows users to create custom stickers for different occasions and events. And as competition with Instagram intensifies, it might represent an important milestone in the process of roping in new users.

Both Snapchat and Instagram are trying to bring people together through their stories. Even if it is about user’s lifestyle, a private event, a concert or a championship they help people spread the word and their experiences.

What makes the difference between the two, especially when using Instagram and Snapchat Stories to market an event?

It only depends on what are your goals, who is your target and what kind of event are you are trying to market in order to decide if Instagram or Snapchat is more suitable for your event.

Having so many users, Instagram’s best use is to bring awareness and gain new potential attendees. But if you want to create an after event marketing, you can make sure that Snapchat is the right tool for you; Leaving all the content to be created by the community, with the wonderful slew of tools that Snapchat has to offer.

We are curious and looking forward to see how this battle is going to end. If Snapchat will raise back by increasing the number of daily users; if Instagram will manage to surpass Snapchat in it’s quality and number of features or why not  live happily ever after by figuring a middle way to survive on the “stories market” by bringing different added value for their users. All in all, social media platforms can help a lot event professionals in terms of marketing and creating awareness. However, finding the right event registration software is also a very important step to deliver a high-quality event.